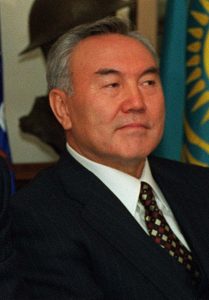 It seems the spectacle of the U.S. election and alleged ‘Russian meddling’ has gone viral. Today, Kyrgyzstan made a formal complaint to the Kazakh ambassador alleging ‘interference’ in the upcoming Kyrgyz October election. The offense was a meeting between Kazakh President Nursultan Nazarbayev and opposition candidate Omurbek Babanov.

“In an angry note to Kazakhstan’s ambassador, the Kyrgyz foreign ministry expressed “bewilderment” at the meeting, which it characterised as “an expression of support”. It said it regarded the meeting as an “attempt to influence the choice of the people of Kyrgyzstan and interference in the internal affairs of the Kyrgyz Republic”,” reported AFP.

Kazakhstan said was “extremely surprised at the reaction”.

Relations between the two former Soviet republics have become strained over the last several years over trade tensions. The upcoming Kyrgyz election will be the first between two elected presidents. Kyrgyzstan is the most open country in Central Asia.

Kazakhstan is also preparing for a transition as Nazarbayev ages. The authoritarian has promoted ideas to open up the country and help economic growth. One initiative is to change the official alphabet back to Arabic from Cyrillic which was established during Soviet times.