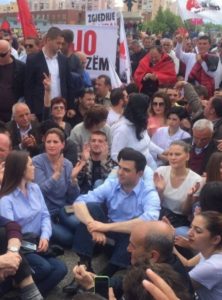 The Democratic Party is not withdrawing from its request to establish a caretaker government, since boycotting elections and parliament. Today, they organized a peaceful protest by blocking the main axes of state roads from the south to the north of Albania. Democratic Party leader, Lulzim Basha, led the protest by sitting in the middle of the road entering Tirana on the roundabout from the Northwest, surrounded by hundreds of supporters, for about an hour. The Police had called on citizens several times not to participate in the protest, which they deemed illegal, and block national roads. Furthermore, it was announced that anyone participating would be penalized. For this reason, the police took photos of the participants, but did not intervene to disperse people. The leaders of the Democratic Party have asked the protesters not to be provoked and not let the protest descend into vandalism. In one instance, on the roundabout, police urged the protesters to allow an ambulance with a sick person inside to pass, and they obeyed.

Similarly, other protesters blocked the road near the Technological school, the access road to Tirana from the West. Roadblocks were organized in other regions of Albania as well, like in Milot rotation, that is the connection with the Nation’s Road in the North. In the Southeast, they blocked Bradashesh turning, as well as the roundabout of Plug.

The roadblocks, as announced, lasted for an hour. No incidents took place.

Today in the late afternoon, a high delegation of the European Parliament, led by Federica Mogherini, is expected to arrive, to discuss the resolution of the crisis in the country, before June elections.

With U.S. distracted, Russia Warms To Opportunities In ‘Frozen Conflicts’