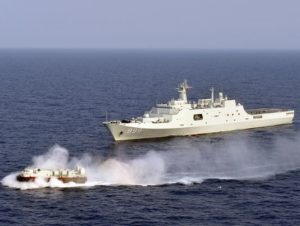 China and Russia will hold “routine” naval exercises in the South China Sea in September, China’s Defense Ministry said on Thursday, adding that the drills were aimed at strengthening their cooperation and were not aimed at any other country, reports Reuters. These drills come after recent joint exercises between the two nations in the Mediterranean.

I have long written that the last six months of Barack Obama’s presidency would see our adversaries taking advantage of the weakness of the Obama presidency before the new sheriff is in town, that sheriff being most likely a President Trump who has made it known his desire to rebuild the American military and power-projection capability worldwide. This prediction has now come to pass. The fact that Russia and China feel they can jointly challenge the U.S. Navy and claim vast international areas of the South China Sea, which are actually very far from China, is simply shocking and a testament to how far the reputation of the U.S. has fallen with Obama, Kerry, and yes, Clinton, at the helm.

“This is a routine exercise between the two armed forces, aimed at strengthening the developing China-Russia strategic cooperative partnership,” China’s defense ministry spokesman Yang Yujun told a regular monthly news conference. “The exercise is not directed against third parties.”

“These drills deepen mutual trust and expand cooperation, raise the ability to jointly deal with security threats, and benefit the maintenance of regional and global peace and stability,” he said. 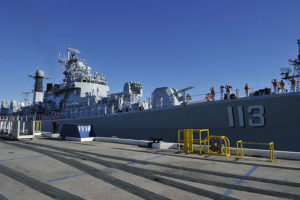 The only question now is how much more damage will be caused to American power before President Obama leaves office. The world cannot accept closure of this area to international traffic. The sea lanes are too important. Russia and China know this but they feel they are powerful enough together to do it anyway, simply astounding.

US ‘Deeply Concerned’ About Spike In East Ukraine Fighting