On October 2 Saudi Arabian journalist and one time Kingdom insider Jamal Khashoggi disappeared after going to Saudi Arabia’s consulate in Istanbul. Almost immediately the Chief Public Prosecutor’s Office in Istanbul began an investigation on the day of the disappearance. The consulate “coordinated” with Turkish authorities. On October 6 Turkish sources indicated that the journalist had been “murdered.” Riyadh calls the claims baseless and has invited Turkey to enter the consulate. The consulate also brought in cameras on October 7 to illustrate their openness.

Many online, including friends of Khashoggi have pointed fingers at Saudi Arabia and accused the incident of being one of many troubling events under Crown Prince Mohammed Bin Salman. But as the days have drifted on questions have deepened. Khashoggi went to get documents to marry his fiancee Hatice Cengiz. “Cengiz said she waited outside for 11 hours, but he did not come,” said the BBC. ” Before entering, he told her to call an adviser to Turkish President Recep Tayyip Erdogan if he did not return.” Turkish president Recep Tayyip Erdogan says he is following the case “personally” and that described the journalist as a friend. “God willing, we will not be faced with an undesirable situation.” Furthermore he said “It is very, very upsetting for us that it happened in our country.” CCTV was being studied for the entrances of the consulate and at the airport (My full report can be found here).

This leads to numerous questions. Here are ten.

Where is the video?

If the investigation began last week then the video should have been released by now showing him go in and not come out. Wouldn’t the authorities want to show this to back up their case? It was supposed to be released Ragip Soylu of Daily Sabah had tweeted.

Where is the airport video?

According to reports “15 men” flew in for the operation, so why don’t we have images and video from the airport showing them come and go? Anadolu notes “Turkish police investigating the case had said in a statement Saturday that 15 Saudis, including several officials, had arrived in Istanbul on two planes and had entered the consulate while Khashoggi was inside. ” Why isn’t there video from the airport showing a suspicious object being flown out? Diplomatic bags, or even crates, have been used to attempt to smuggle people out before by embassies.

UPDATE: “They know he came in, didn’t come out. They saw uncredentialed personnel, coming to embassy immediately after Khashoggi’s first visit. They think they were dispatched from Riyadh. They speak of an staffer, packing stuff into trunk, and leaving." https://t.co/bj95RTHOQU

Why aren’t their photos of the alleged perpetrators?

If the 15 man team came, why doesn’t Ankara publish details of them, the way law enforcement does when looking for perpetrators? Dubai police did that after an assassination in 2010. Borzou Daragahi tweeted on October 7: “They know he came in, didn’t come out. They saw uncredentialed personnel, coming to embassy immediately after Khashoggi’s first visit. They think they were dispatched from Riyadh. They speak of an staffer, packing stuff into trunk, and leaving.”

Thomas Friedman tweets about the need for US involvement

Why a local public prosecutor?

According to reports Cengiz, the fiancee, was told to phone high level authorities, if he didn’t return. So shouldn’t Ankara have immediately involved high level intelligence services and the highest law enforcement authorities given the severity of the allegations and prominence of the individual.

It would seem that if Ankara took this seriously, as they appear to have done, that it would require the absolute best intelligence and law enforcement authorities to be investigation.

Where are the foreign intelligence services and diplomats?

Usually there are well placed leaks in western media by government officials and western intelligence services will monitor an incident like this. Given Khashoggi’s high profile and friends in the US, including pressure from many Washington insiders and important media, one would assume that there would be more information and leaks forthcoming from western sources. There have been many other stories in American media about minor details regarding Saudi Arabia and about connections between the Crown Prince and US officials. There was no shortage of coverage of inside stories of the “royal purge” in November 2017. There were even stories about paintings and villas. Yet there is no source willing to talk about this momentous disappearance? Usually it appeared in the past that those within the Kingdom who opposed MBS at home would speak to Western media somehow, or former officials in Washington would speak out using contacts from Riyadh for information. 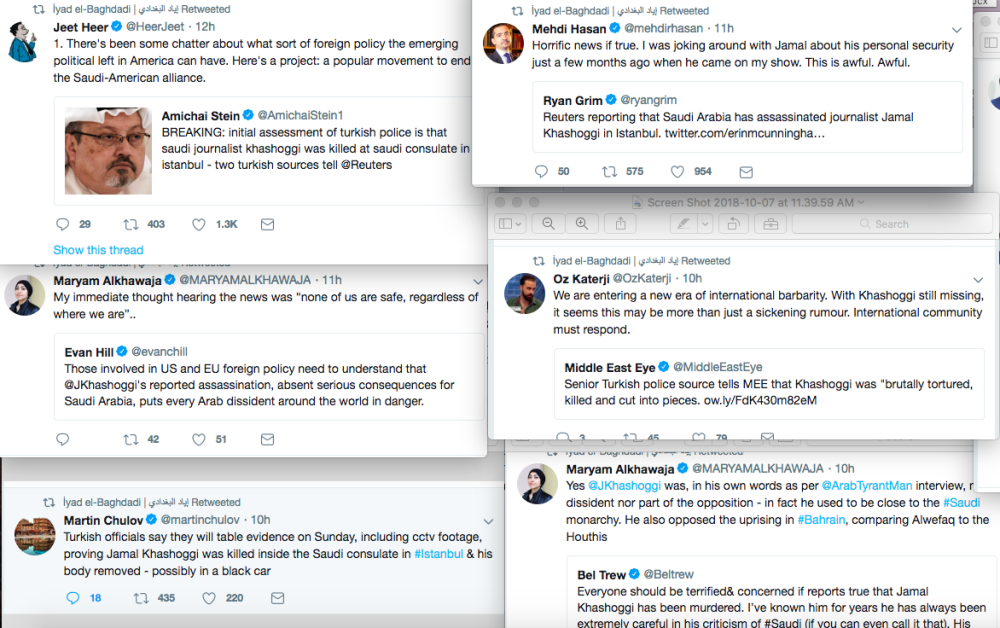 Reactions to the disappearance.

Why would Riyadh do this?

A high profile action like this would make Saudi Arabia lose allies or alienate those on the fence, so why do it? Russia learned this in UK and across the US and Europe where its diplomats have been expelled after accusations of meddling or even poisoning a dissident.

Is Riyadh trying to send a message? Such a high profile act is sure to have repercussions so why do it brazenly?

Given the fallout from the Hariri incident last year, including allegations of a “kidnapping” and that he was detained. In September Riyadh had to navigate its decision to sanction Canada and Adel al-Jubeir was strident in standing up to Canada. Bruce Riedel has been arguing that the Kingdom is “its least stable” in fifty years. This would only cause more people to think so. Or would it cause people to take Riyadh more seriously? it’s unclear the calculation behind such an act, which makes it less clear if Riyadh would gamble like this.

Why the focus on Mohammed Bin Salman?

There is a well known narrative accusing Mohammed Bin Salman of being “reckless” and leading Kingdom to “instability” but clearly an act like is bigger than just one person. Yet many media have used this to target Bin Salman again.

For an incident like this to happen at an embassy in a foreign country the security services, intelligence services and diplomatic corps would all have to know something about the operation. Perhaps they didn’t all know all the details, but nevertheless as mentioned above, a gamble like this, to target a former insider, would require planning and effort. And to do it in Turkey, a sophisticated country with its own highly prized intelligence service, would be complex.

There appear to be two Ankara narratives. One is the public prosecutor investigation and the other are “sources” who told media the journalist “brutally tortured, killed and cut into pieces.” One is designed to present a story of a state of law, which Turkey has done in the case of the detained US pastor. So the local police are investigating a missing person.

But the other story is the sources that supposedly told Middle East Eye about a brutal killing. Daily Sabah also repeated this assertion. Most foreign media reported the “murder” assertion on October 6. But BBC and others seem to be hedging now. “An official of Turkey’s ruling AK Party told broadcaster CNN Turk there was concrete evidence in the case, although none has yet been presented,” notes BBC.

The comments by the Turkish president now indicate “hope” and an “unsettling” incident. How can the two be squared. One narrative is about a brutal murder and allegations of a body being transported out of the country. The other is about hope and an unclear incident.

If the investigators seriously believe Khashoggi was kidnapped and killed and taken out of the country, then after five days wouldn’t Ankara act, sanction the diplomats, or do something? It’s not clear. What options are they weighing? Turkey wants to avoid an undesirable situation, Ankara says. ““Whatever comes of this, we will be the ones to declare it to the world,” Erdogan told reporters.

So what is Turkey waiting for?

Momentum seemed to be building, but now it seems to be slowing. Why? What happened between October 3 and 6 that changed on the seventh? On the 3rd the investigation would have been moving forward. “Turkish presidential spokesman Ibrahim Kalin said Khashoggi was still in the consulate and the government was monitoring the situation,” Reuters reported. “Mr. Khashoggi visited the consulate to request paperwork related to his marital status and exited shortly thereafter,” a Saudi official said. “He is not in the consulate nor in Saudi custody.”

Turkey summoned the Saudi envoy on October 4. On October 5 the Crown Prince invited Turkey to search the consulate. The Washington Post published a blank column the same day. On October 6 claims emerged that he had been murdered in the consulate and sources said his body had been taken out of the country by the “15 man” team. A video was supposed to be released. By October 7 there was no more information except that Turkey’s President was following the issue personally. However Kalin had been following it since October 4 and Kalin is Erdogan’s close advisor.

So why the change of pace?

Why Is US-Funded Radio Free Europe/Radio Liberty Pushing The Exploitation Of Children By Leftist Activists?