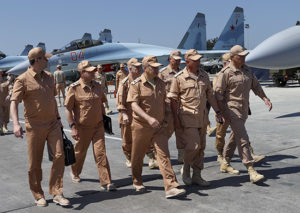 Privately, Russian officials are furious with Syrian President Bashar al-Assad for a suspected April 4 chemical weapons attack in Idlib province that killed over 80 people, Russia analysts said. They see it as threatening to sabotage the potential for US-Russia rapprochement ahead of US Secretary of State Rex Tillerson’s first visit to Moscow this week.

Summary⎙ Print Syria’s alleged chemical weapons attack in Idlib province has threatened to sabotage potential US-Russia rapprochement, and Russia is privately furious with Syrian President Bashar al-Assad.
Author Laura RozenPosted April 10, 2017
But Russia is also confused by what it perceives as contradictory statements from various top Trump Cabinet officials on whether US policy is shifting to demand Assad’s ouster, to what degree does the United States think Russia is culpable for Assad’s behavior, and more broadly, who from the administration speaks for Donald Trump, they said.

“Assad committed suicide here,” Michael Kofman, a Russia military expert with the Kennan Institute, told Al-Monitor in an interview April 10. Russia “will never forgive him for this…”

Russia, China Catching Up To US Military